Free CLE for Section Members: Views from the Bench—How to Put Your Best Foot Forward in Motion Practices

Join us for this Solo & Small Firm Section Wednesday Wisdom on Zoom* to hear from Circuit Court Judges Jean and Fahnestock as they share their experiences and observations on how attorneys can most effectively appear before the court to cultivate a stellar reputation. You will hear about what sets the most successful attorneys apart from those who are less skilled as well as sources of irritation for judges so you will never find yourself being identified as THAT lawyer. 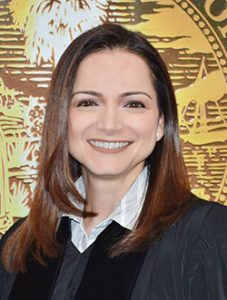 Judge Lody Jean was appointed to the Miami-Dade County Court on November 16th, 2018. She became the first Haitian-American woman to serve on the Miami-Dade County Court. Born and raised in Haiti to Lebanese parents, she attended college at the University of Miami where she double majored in Political Science and International Studies with a minor in Foreign Languages.

She obtained her Juris Doctor from St. Thomas University. While in law school, she was the recipient of the Haitian Lawyers Association law school scholarship. Also, while in law school, Judge Jean interned at the Legal Services of Greater Miami working with a staff attorney on the Haitian Citizenship Project applying for naturalization for those primarily of Haitian descent. Judge Jean also interned at the Third District Court of Appeal (3DCA), at the Miami-Dade Public Defender’s Office and Broward State Attorney’s Office. While at the 3DCA, Judge Jean was a summer clerk for the Honorable Melvia Green who was the first African American woman to be appointed to the Miami-Dade Circuit Court.

From May 2013 through December 2018, Judge Jean served on the Florida Bar’s Unlicensed Practice of Law Committee. She served as the Chair of that committee in the year 2018. The committee is a voluntary committee comprised of non-attorneys and attorneys who investigate the unlicensed practice of law in Miami-Dade County. The Florida Bar has an office in Miami and investigates a wide range of matters but the Committee the Judge served on was assigned immigration related cases.

From August 2004 to June 2012, she served with the State Attorney in Miami-Dade County, first as an Assistant State Attorney, and then as a Felony Division Chief. As a Deputy Chief, she prosecuted homicide cases and supervised many Assistant State Attorneys. From June 2012 through the date of her Judicial Commission, she was in private practice specializing in immigration and criminal defense with a focus on deportation related matters. While in private practice, she spoke at many forums and community gatherings on the topic of immigration law and deportation. She also volunteered her time through the Haitian Lawyers Association and other organizations at clinics dealing with many different legal issues ranging from eviction, small claims suits, citizenship and TPS (temporary protected status).

She is a member of many Voluntary Bar organizations and a past member of the Judicial Diversity Initiative that is dedicated to the election and appointment of qualified minority jurists to the bench. She is a past director of the Haitian American Chamber of Commerce of Florida, Sant La Haitian Neighborhood Center and a Past President of the Haitian Lawyers Association.

From January 3, 2019 through November 5, 2019, Judge Jean served in the North Dade Justice Center for the Miami-Dade Courts. This is a branch court that offers a variety of services to the residents of northern Miami-Dade County. Judge Jean had a hybrid division where she presided over a primarily civil docket consisting of small claims and county court cases. She also presided over a Domestic Violence docket composed of final hearings on filed injunction cases.

Judge Jean was promoted to be an Associate Administrative Judge for County Court; affectionately known as the “People’s Court”. Miami-Dade County is the most populous County in the State of Florida with the most diverse backgrounds. She handled a civil docket, which comprised of small claims and county court cases. She also worked closely with the Miami-Dade County Clerk’s Office on administrative issues to help keep the County Court running efficiently to serve the community. 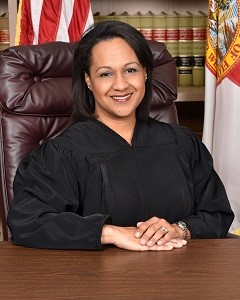 Judge Fabienne E. Fahnestock grew up in Broward County. She attended the University of Miami and obtained her bachelor’s degree in English. She earned her law degree from the University of Florida, Levin College of Law, and was admitted to the Florida Bar in 1998. Judge Fahnestock was subsequently admitted to the United States District Courts for the Middle and Southern Districts of Florida, the Ninth

Judge Fahnestock had the privilege to clerk for the Fourth District Court of Appeal of Florida. There, she worked on a variety of appeals. Judge Fahnestock was responsible for critically analyzing the parties’ legal arguments and relevant case law, and making recommendations to the appellate panel for each case. At the end of her clerkship, she joined Ruden McClosky, and in 2002, she joined Gunster and was elevated to Shareholder in 2007.

Over the course of her career, Judge Fahnestock has been recognized for her outstanding legal achievements. To name just a few, she has been honored with an AV Preeminent ranking by Martindale-Hubbell, and selected for inclusion in The Best Lawyers in America® 2013 and 2014 in the field of Trusts & Estates Litigation. She has also been listed among the “100 Outstanding Women of Broward County” and recognized as a Florida Super Lawyer, as well as a “Top Lawyer” and “Up & Comer” by South Florida Legal Guide.

But Judge Fahnestock’s accomplishments were not solely related to her legal skills. As a resident of  Broward County for over 30 years, Judge Fahnestock felt compelled to invest her passion and dedication in our community with a focus on families and children. Her commitment is evidenced by her work with the Children’s Cancer Caring Center, the Jack and Jill Children’s Center, and the Early Learning Coalition. Judge Fahnestock also devoted her time mentoring young men and women at her firm, as well as in the community through the Annual Kozyak Minority Mentoring Picnic and as the co-chair for Leadership Broward’s Women Leading Broward. She was also very active in many voluntary bars and in the Florida Bar. For example, Judge Fahnestock was a member of the Board for the Broward County Women Lawyers Association, participated in Class IV of the Florida Bar Leadership Academy, and served as a member of the Executive Council for the Real Property, Probate and Trust Law Section for the Florida Bar, where she was Chair of the Membership Diversity Committee.

On February 14, 2017, Judge Fahnestock was appointed as a circuit judge in the Seventeenth Circuit Court, serving Broward County, Florida. She was assigned to the Family Division of the Unified Family Court for 4 ½ years, where she was the assigned Chair for the division for 3 years. In July 2021, Judge Fahnestock was assigned to the Circuit Civil division where she presides over a variety of civil disputes, including breach of contract cases, insurance disputes and personal injury cases.